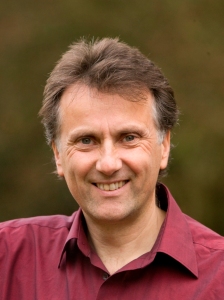 In the second of a (very brief) series of predictions for 2012 from top sports journalists, I spoke to writer and broadcaster CHRIS BOWERS for his thoughts on the tennis year ahead…

The 2012 tennis calendar is well underway – Andy Murray’s year began with his 22nd career title, beating an injury-stricken Alexandr Dolgopolov in Brisbane last week, while the scramble for qualifier places in the Australian Open, is taking place as we speak.

Last year most definitely belonged to Novak Djokovic – the Serb, later deservedly named BBC Overseas Personality of the Year, cleaned up at three of the four Grand Slams, lost just six matches all season and ended the year as world number one. But Chris Bowers says Djokovic will find it hard to maintain that incredible standard – and his main threat could come from a resurgent Roger Federer and a determined Andy Murray.

“I believe Djokovic could drop off the pace a bit and maybe [Rafael] Nadal will as well,” Bowers told me. “So perhaps Federer and Murray will contest more this year.

“What he [Murray] has to do [to win a slam] is to stay in there and perform to the level he’s at now. I think he will reach another grand slam final but whether he will win it or not, we will have to see.”

Bowers is also intrigued by Murray’s appointment as coach of Ivan Lendl – who, despite winning eight slams in a title-laden career, has no previous experience of coaching a player on the men’s tour.

“The only thing I’d say about Lendl is that he won’t come cheap, which makes me think that Murray will probably listen to him more intently than he has appeared to listen to some of his past coaches. It’s an interesting appointment, but the proof of the pudding will be in the eating, as they say.”

Can anyone emerge this year to challenge the quadopoly at the top of the men’s game? Perhaps, but there’s no stand-out candidates, says Bowers.

“The one person I could see climbing up is [Juan Martin] Del Potro. He’s won a slam and he could do well for a week or a fortnight, but I wonder whether he has the stickability to break into the top four.

“Players tend to come from nowhere and have a good year before falling away again. The Americans call this the ‘Sophomore Slump’, and I think Dolgopolov and Raonic will endure that.”

If the strength of the men’s top four can make the slams all too predictable, it’s a different scenario in the women’s game, where in the post-Williams era no dominant force has emerged. There may be controversy over the WTA’s rankings system, but its current number one-ranked player – Caroline Wozniacki – is undoubtedly also its star attraction, and her burgeoning relationship with golf’s latest superstar Rory McIlroy has done her media profile no harm at all.

Bowers said: “The men have the great rivalry at the top, with Federer, Nadal and now Djokovic, and since the open era began in 1968 the women’s game has always had great eras, but at the moment it depends on Wozniacki winning a slam, especially now she’s with Rory McIlroy.

“Something in terms of a rivalry may develop with Petra Kvitova, who I can see being number one by the end of January. It’d be like Borg versus McEnroe – a clash of styles, the glamorous one versus the slightly laid back one.”

It wasn’t that long ago that the cupboard look bare when it came to British women’s tennis – the days of the names of Christine Truman, Ann Jones, Virginia Wade and Sue Barker being etched on to grand slam trophies soon became a distant memory, replaced instead by generous wildcards being dished out at Wimbledon in an attempt to inspire mediocre players to greater things. The second round, mainly.

But now there are five British women in the top 200, with three of them – Elena Baltacha, Anne Keothavong and Heather Watson – in or around the top 100. And now there is a formidable figure in charge following the appointment of Andy and Jamie Murray’s mum Judy as Fed Cup captain late last year.

Bowers believes Mummy Murray has chosen the right time to step out of her sons’ corner and become chief flag-waver for the LTA’s women. He told me: “We’ve potentially got a great generation of women’s tennis to come, with Baltacha and Keothavong doing well in the twilight of their careers and these highly contrasting teenagers, Robson with all the shots and Watson with all the attitude. If Judy can harness that she could pick up on a really good opportunity.”

Shortly after Wimbledon fortnight, SW19 will undergo a transformation in time for the Olympic tennis tournament – the ‘predominately white’ clothing rule will be ditched and players encouraged to wear national colours, and the Games’ ‘commercial partners’ will no doubt want their logos emblazoned around the venue. But Bowers doesn’t think an extra couple of weeks of home-grown tennis will do much to enhance tennis participation in this country

He said: “It’ll be interesting for people to see Wimbledon in a different guise, with colours and advertising, but I don’t think it’ll do much for British tennis. The only way it might is if Britain has a bad Olympics [in other sports] and Murray wins gold.”

But Bowers is excited by a rule change which he believes could revolutionise the way young talent develops. From January 1 this year, tournaments for players aged 10-and-under are to be played using slower-moving and lower-bouncing balls, on smaller courts and with shorter, lighter racquets. This, said Bowers, may produce players with more technical skills, as opposed to those schooled with the ‘bash-it-and-smash-it’ approach to the game.

He added: “I believe that in 10 years from now this will have produced more volleyers and more one-handed backhands, because youngsters will start playing the game that is more natural to them, rather than thumping the ball from the baseline and the back of the court.”

Chris Bowers has reported and commentated on tennis for numerous newspapers and radio stations, including the BBC and Eurosport, and in 2006 wrote the first international biography of Roger Federer. A fluent German and French speaker, he is executive director of Tennis Radio Network and continues to tour the globe covering numerous tournaments. Outside tennis, Chris is active in environmental campaigning and is also a Liberal Democrat district councillor. Last year he wrote a biography of party leader, and deputy prime minister, Nick Clegg. His political blog is found here: http://www.chrisbowersforwealden.blogspot.com/

Freelance sports journalist and commentator with 20 years of suffering the ups and downs of Aston Villa. Twitter: @andrew_raeburn
View all posts by Andrew Raeburn »
« Crystal Ball: Jonny Gould on football in 2012
Crystal Ball: Bruce Talbot on cricket in 2012 »